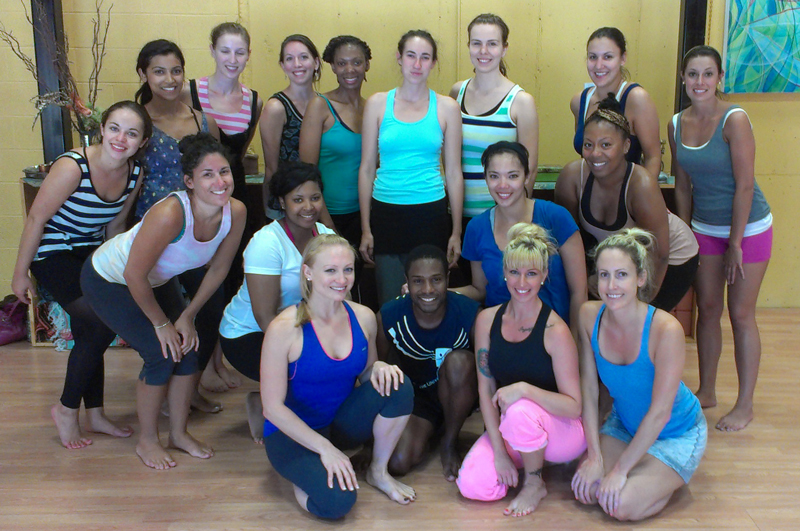 I’m adding in a second post for Week 3 (following our weekend rehearsal) mainly because of the wonderful company technique class we had on Saturday. This is the first season we have been able to open some of our company classes to community dancers, and so far the response has been great! We had eight dancers join our company and apprentice dancers on Saturday morning, which is probably the perfect number so our space doesn’t get too crowded yet we have lots of extra dancer-energy jumping around.

I certainly love teaching class, so much that sometimes I wonder if I should keep choreographing? Wouldn’t life be easier if I just concentrated on teaching? The answer is surely yes, but I know I miss creating new art when I’m not. (That hasn’t happened very often lately, but I do still know that!) Besides that, a huge element of being a choreographer is also being a teacher – at least in small companies without rehearsal directors or dance captains, etc. It is my responsibility to teach each dancer to perform the material the way I envision, even if that changes slightly based on the nuances of that individual dancer.

Over the past five seasons with Code f.a.d., I’ve had the pleasure of working with many of the same dancers for all those 5+ years. I’ve had the joy of teaching technique class and teaching my choreography to these dancers for so long that it feels easy now. (Well, relatively easy.) While the dancers have kept their own individual performance styles, we have all merged into a collective vision – a unified style of movement. This is the only reason why it is possible to create dances with Dear Nature over such a short amount of time. These dancers are wonderfully dedicated (in addition to being talented), and have absorbed anything I’ve taught them over the years. (It is also worth mentioning one of our cast members in this work is a much newer company member, only in her 3rd year with Code f.a.d. while the rest are in their 6th. Kristina is learning quickly!)

So, thank you dancers! Thank you company dancers for dancing with me for so long, and thank you company class attendees for bringing your energy into the mix. I look forward to seeing you (and maybe a few new faces) at our next class on September 7.

Editor’s note: I was introduced to Gerren soon after I began teaching at NC State University, through Dance Program Director Robin Harris. Gerren was an alum of the NCSU Dance Company and lucky for us, was still dancing and living in Raleigh after graduation! He is another one of our dancers who has been with the company since it started; he actually worked with me also for my film project Product, which began before Code f.a.d. was “officially” founded.

It is difficult to say what a typical day in my life would be like because, like most people I know, no two days could ever quite be the same. This is even more true now that I am in my second year of law school. On a typical day during the semester, I wake up around 5:45 in the morning to get ready for school. The first thing I do is make a pot of coffee because I am generally not a functional person prior to having at least one cup. Then I prepare my lunch and any snacks to keep me going for the majority of the day. This helps reduce my temptation to go out to lunch and make poor eating choices, even though I have to admit that Chargrill and Snoopy’s Hotdogs are only two blocks away from school and are often rotated into my lunch plans during the examination period.

When I arrive at school around 7:30 in the morning, I immediately drop my books off at my favorite study corral in the library, as I am likely to be in the same spot for the vast majority of the day. I try to schedule my classes early so I can utilize the afternoons to prepare for any classes or research any cases or laws I may need for upcoming assignments. I will often stay at school literally all day, sometimes not leaving the library until 10 at night, but I do take a break between 4 to 5 in the evening to either go workout at the gym, take a yoga class, attend a Code f.a.d. rehearsal, or even teach a dance class in the evening. One of the things I have learned as being a law student is that it is okay to take a break when you need one and you should often schedule these breaks to avoid taking too much time off or not allowing your brain time to rest in between reading assignments. Plus as a dancer, it is important to not only keep my physical physique up to par, but my mental capacities as well. Rehearsals require us dancers to have both physical and mental strengths because it is important for injury prevention and to retain the complexities of each choreographic piece. Prior to attending rehearsals and during my off-time, I spend a portion of the day going over choreography and listening to the music we dance to from our in-house composer (Todd Buker) in order to catch certain accents in the music and translate them into my movements.

The last thing I do before my day ends is try to spend some time watching television, specifically the Daily Show or catch-up with Modern Family and House Hunters on my DVR. I think it is important to allow my brain to disconnect somewhat to everything I did prior to that point. This helps me to relax and have an uninterrupted number of hours to sleep.

And this is what is a typical day in the life of Gerren Mobley….thanks for reading.